The SysFlow format lifts raw system event information into an abstraction that describes process behaviors, and their relationships with containers, files, and network. This object-relational format is highly compact, yet it provides broad visibility into container clouds. The framework includes several APIs that allow users to process SysFlow with their favorite toolkits.

Figure 1 shows a diagram of the SysFlow format.

Entities represent the components on a system that we are interested in monitoring. We currently support four types of entities: Pods, Containers, Processes, and Files. As shown in Figure 1, Containers contain references to both Pods, Processes and Files, and the four are linked through object identifiers (more on this later).

Entity behaviors are modeled as events or flows. Events represent important individual behaviors of an entity that are broken out on their own due to their importance, their rarity, or because maintaining operation order is important. An example of an event would be a process clone or exec, or the deletion or renaming of a file. By contrast, a Flow represents an aggregation of multiple events that naturally fit together to describe a particular behavior. For example, we can model the network interactions of a process and a remote host as a bidirectional flow that is composed of several events, including connect, read, write, and close. SysFlow also model events generated by the Kubernetes controller.

SysFlow enables users to configure the granularity of system-level data desired based on resource limitations and data analytics requirements. In this way, behaviors can be broken out into individual events or combined into smaller aggregated volumetric flows. The current specification describes events and flows in three key behavioral areas: Files, Networks, and Processes. 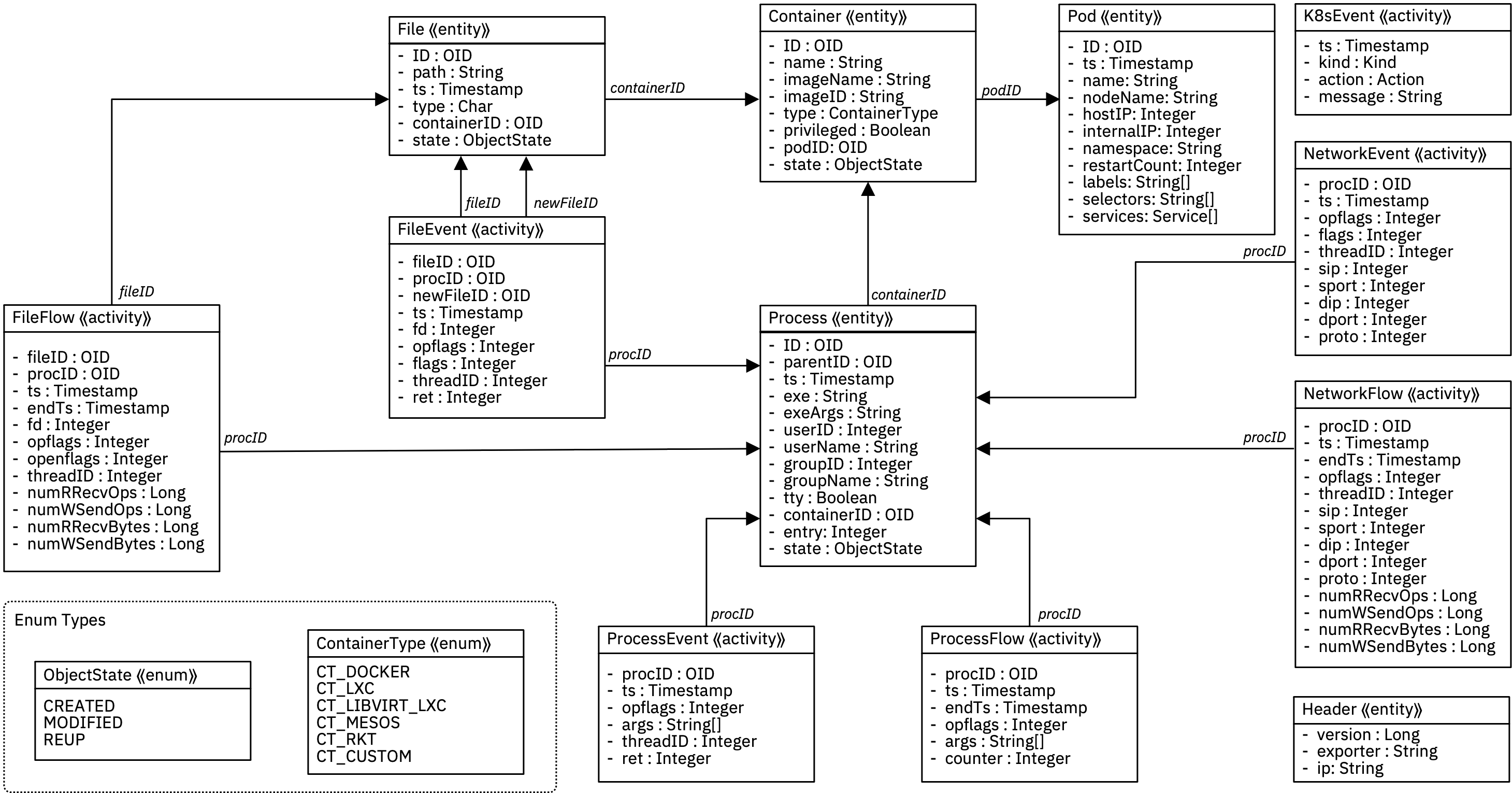 Entities are the components on a system that we are interested in monitoring. These include pods, containers, processes, and files. We also support a special entity object called a Header, which stores information about the SysFlow version, and a unique ID representing the host or virtual machine monitored by the SysFlow exporter. The header is always the first record appearing in a SysFlow File. All other entities contain a timestamp, an object ID and a state. The timestamp is used to indicate the time at which the entity was exported to the SysFlow file.

Object IDs allow events and flows to reference entities without having duplicate information stored in each record. Object IDs are not required to be globally unique across space and time. In fact, the only requirement for uniqueness is that no two objects managed by a SysFlow exporter can have the same ID simultaneously. Entities are always written to the binary output file before any events, and flows associated with them are exported. Since entities are exported first, each event, and flow is matched with the entity (with the same id) that is closest to it in the file. Furthermore, every binary output file must be self-contained, meaning that all entities referenced by flows/events must be present in every SysFlow file generated.

The state is an enumeration that indicates why an entity was written to disk. The state can currently be one of three values:

Each entity is defined below with recommendations on what to use for object identifiers, based on what is used in the current implementation of the SysFlow exporter.

The Header entity is an object which appears at the beginning of each binary SysFlow file. It contains the current version of SysFlow as supported in the file, and the exporter ID.

The Container entity represents a system or application container such as docker or LXC. It contains important information about the container including its id, name, and whether it is privileged.

The Pod entity represents a logical aggregation of containers in Kubernetes. It contains metadata about k8s pod including its id, name, and host and internal IPs.

The File entity represents file-based resources on a system including files, directories, unix sockets, and pipes.

Events represent important individual behaviors of an entity that are broken out on their own due to their importance, their rarity, or because maintaining operation order is important. In order to manage events and their differing attributes, we divide them into three different categories: Process, File, and Network events. These are described more in detail later on.

Each event and flow contains a process object id, a timestamp, a thread id, and a set of operation flags. The process object id represents the Process Entity on which the event occurred, while the thread id indicates which process thread was associated with the event.

The operation flags describe the actual behavior associated with the event (or flow). The flags are represented in a single bitmap which enables multiple behaviors to be combined easily into a flow. An event will have a single bit active, while a flow could have several. The current supported flags are as follows:

A Process Event is an event that creates or modifies a process in some way. Currently, we support four Process Events (referred to as operations), and their behavior in SysFlow is described below.

The list of attributes for the Process Event are as follows:

A File Event is an event that creates, deletes or modifies a File Entity. Currently, we support six File Events (referred to as operations), and their behavior in SysFlow is described below.

The list of attributes for the File Event are as follows:

A k8s Event is an event that records Kubernetes event information.

A Flow represents an aggregation of multiple events that naturally fit together to describe a particular behavior. They are designed to reduce data and collect statistics. Examples of flows include an application reading or writing to a file, or sending and receiving data from another process or host. Flows represent a number of events occurring over a period of time, and as such each flow has a set of operations (encoded in a bitmap), a start and an end time. One can determine the operations in the flow by decoding the operation flags.

A flow can be started by any supported operation and are exported in one of two ways. First, they are exported on an exit, or close event signifying the end of a connection, file interaction, or process. Second, a long running flow is exported after a preconfigured time period. After a long running flow is exported, its counters and flags are reset. However, if there is no activity on the flow over a preconfigured period of time, that flow is no longer exported.

In this section, we describe three categories of Flows: Process, File and Network Flows.

The list of attributes for the Process Flow are as follows:

A File Flow represents a collection of operations on a file. Currently we support the following operations:

The list of attributes for the File Flow are as follows:

A Network Flow represents a collection of operations on a network connection. Currently we support the following operations:

The list of attributes for the Network Flow are as follows:

NOTE The current implementation of NetworkFlow only supports ipv4.